At some point you will see that you arrive at a value that will become stable and not change anymore. And that value will be… φ, the golden ratio!

But this equation also has another answer, -1/φ. If you plug that value into the equation, it will be the same, too. The real magic happens once you have rounded the -1/φ down (or up), i.e. once what you plug into the equation is no longer exactly -1/φ. What happens is that, if you keep going, you will eventually reach… φ as your answer!

Simon saw this interesting fact in a video by 3Blue1Brown and then came up with a proof as to why it happens.

On the left are Simon’s notes after reading Physics Girl’s blog about quarks (the colourful stuff is foam clay):

Simon showed this expression with Phi to his math teacher, who noticed that Simon didn’t apply the quadratic formula (with a discriminant b2−4ac) in his solution. The teacher wondered if Simon knows the formula. As it turned out, Simon knew the formula very well but preferred to prove the solution on his own, because it was so beautiful in the case of Phi:

“If I get the next two digits right, I’ll be ecstatic!” Simon says, as he hurries on with a φ (Phi) approximation algorithm using Fibonacci numbers. He keeps dividing every following Fibonacci number by the previous one and eventually gets quite a good Phi approximation a precision of 6 digits! This experiment is inspired by Mathologer, who applied this algorithm to approximate both Pi and Phi and show how “wildly less irrational Pi is than Phi”, Simon says. Simon calculated more terms for Phi though. 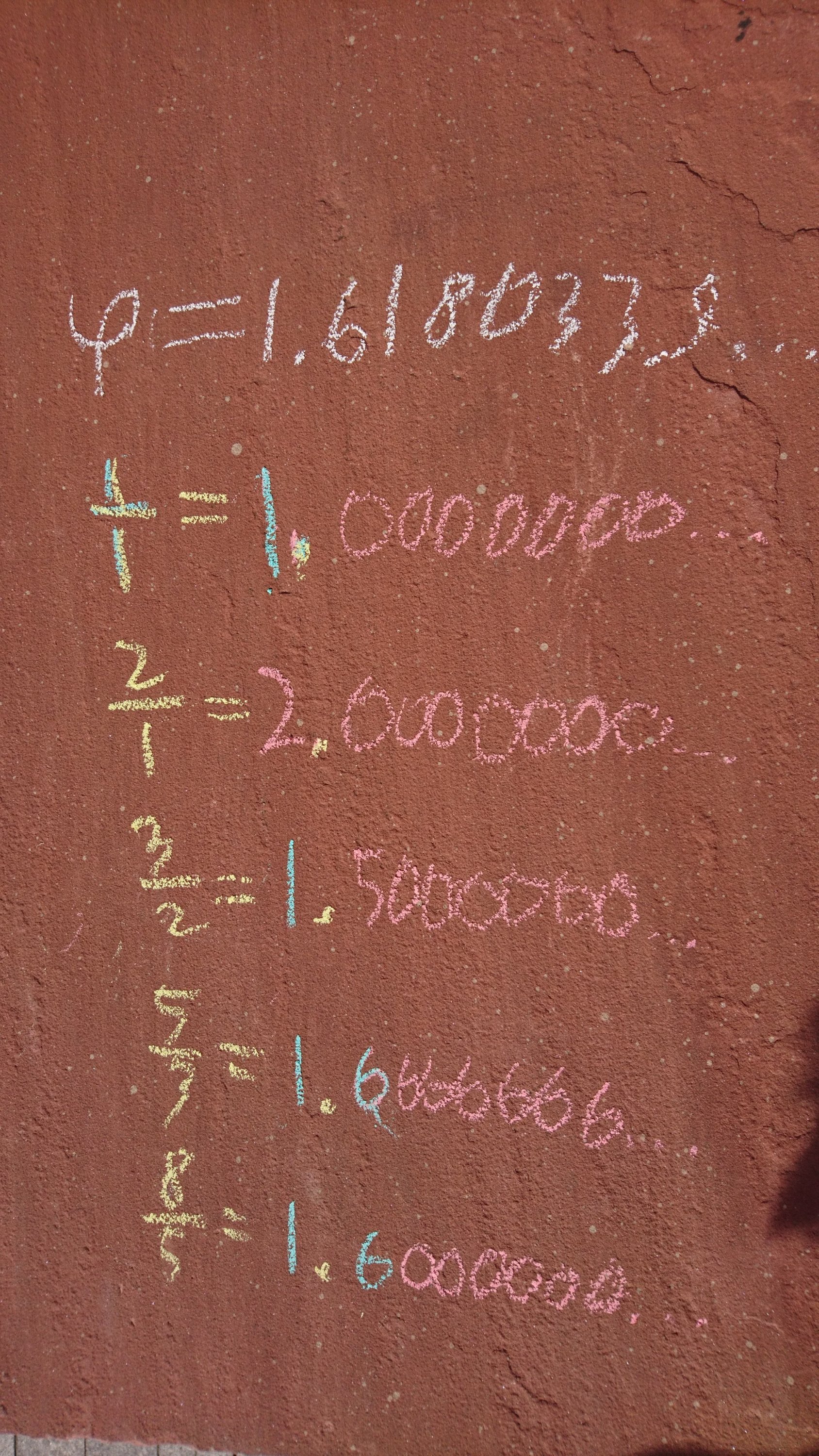 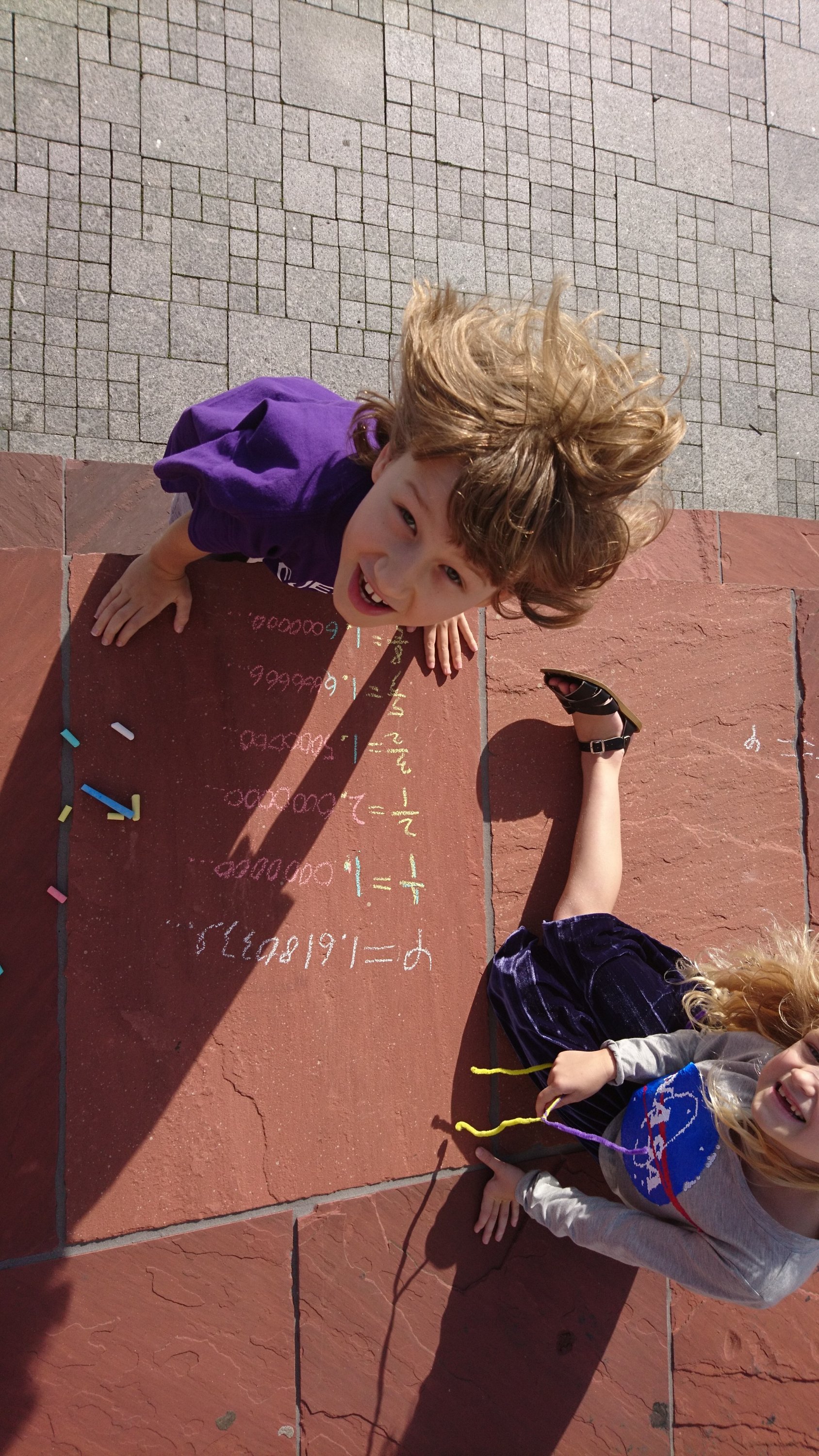 Simon saw a way to draw epitrochoids (gear rolling outside another gear) and hypotrochoids (gear rolling inside another gear) on VSauce: two equal circles rolling around each other form a cardiod (a heart-like shape in the Mandelbrot set), and if you take an outside circle twice as small as the inner circle, you’ll get a nefroid, if the radius of the outer circle is 1/3 of that of the inner circle, you’ll get a flower with 3 petals, if it’s 1/4 – a flower with 4 petals and so on. Basically, this is the way a spirograph works. “What if I take an irrational number?” Simon asked, all excited. The radius of the outer circle will not equal a half, or a quarter of the radius of the inner circle, but let the ratio be an irrational number. “Let’s take an easy one: 1/Phi!” Simon took his compasses and constructed the golden ratio, then subtracted 1 from it (as Phi – 1 equals 1/Phi). “I’m almost certain something beautiful is gonna pop up!”

The two circles with the ratio of 1/: 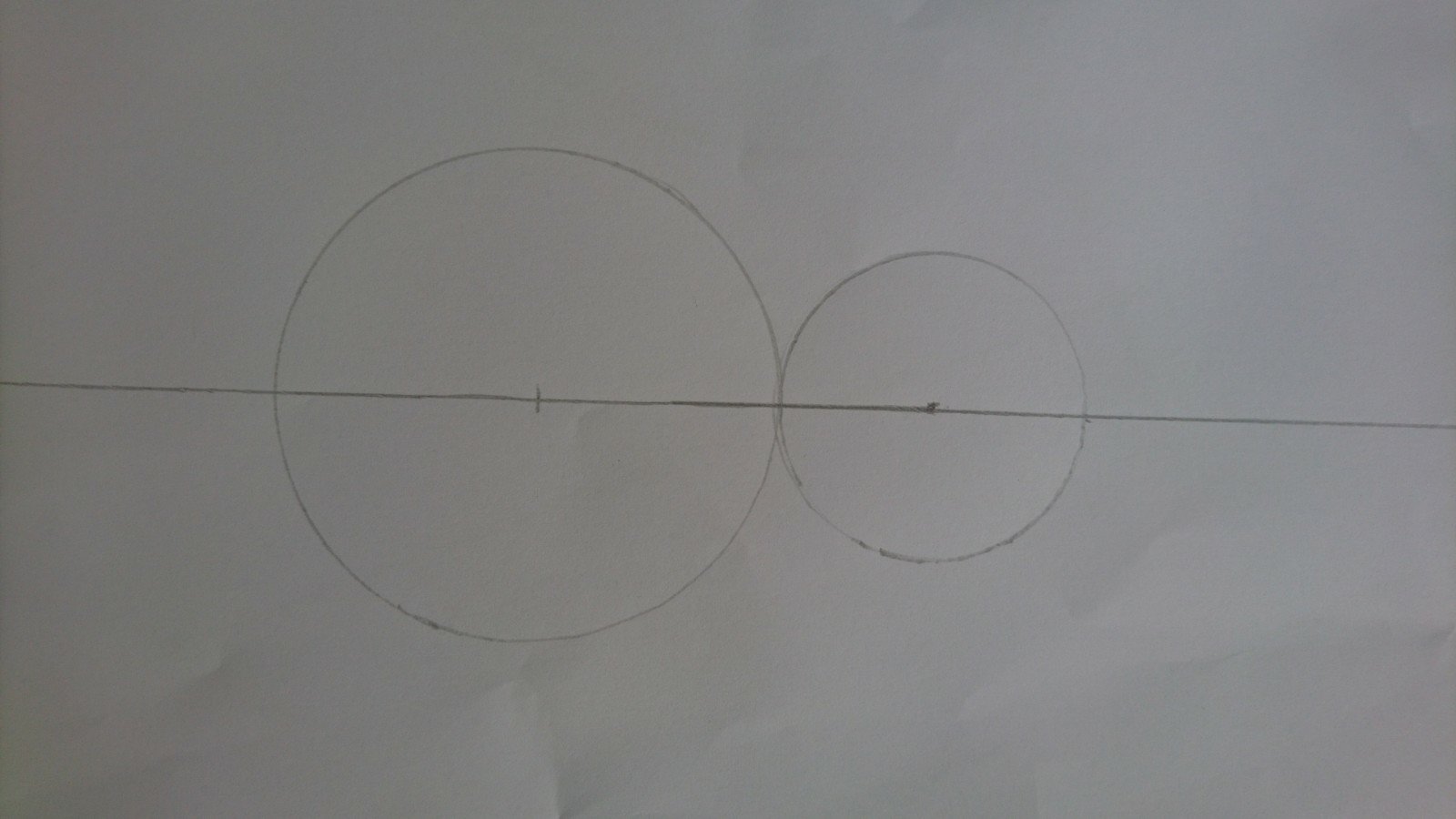 Cutting the circles out of cardboard: 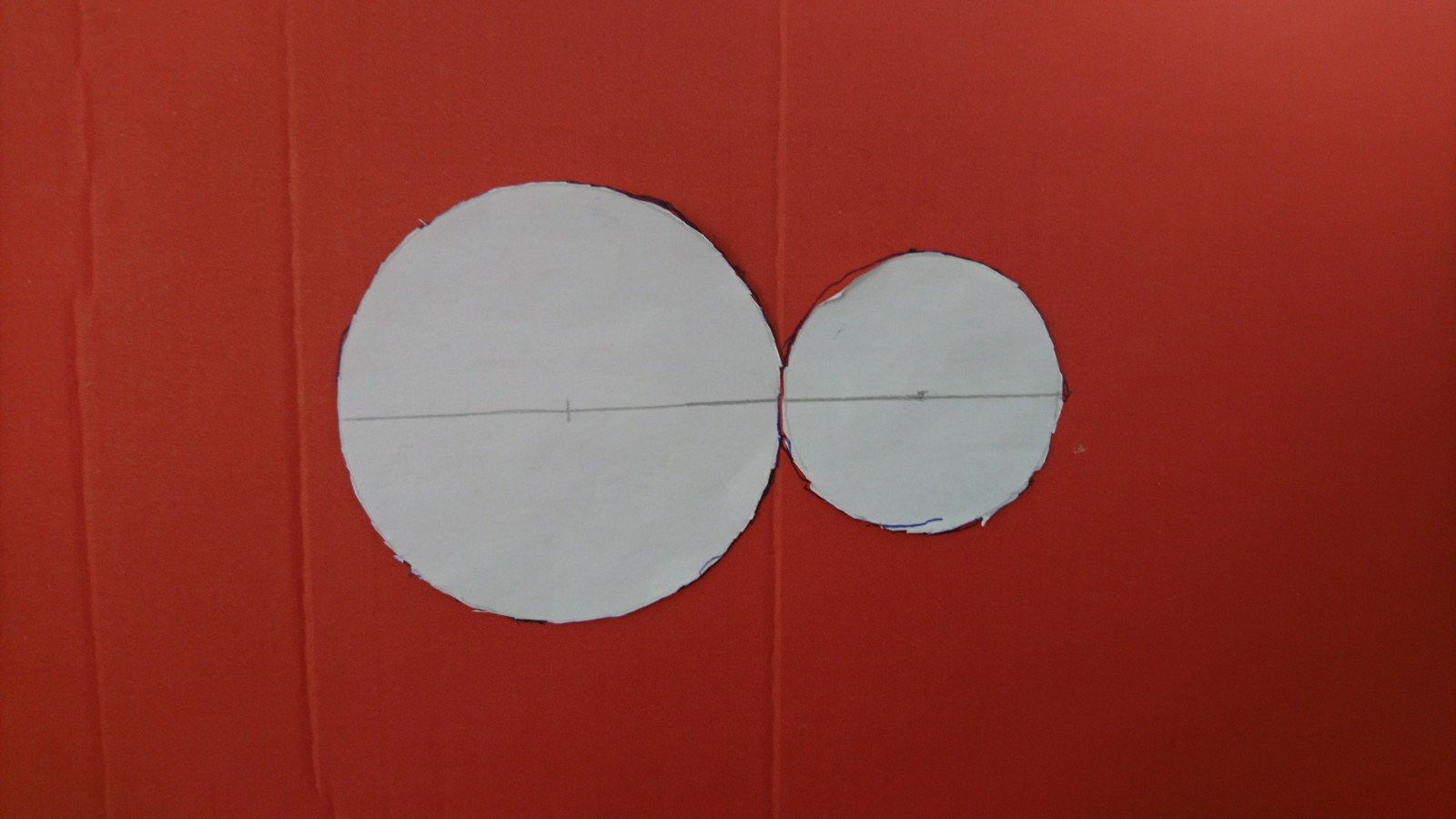 The first 1 1/4 rolls around the inner circle sort of resembled a cardioid:

Simon worked out the diameter and the circumference of the flower: 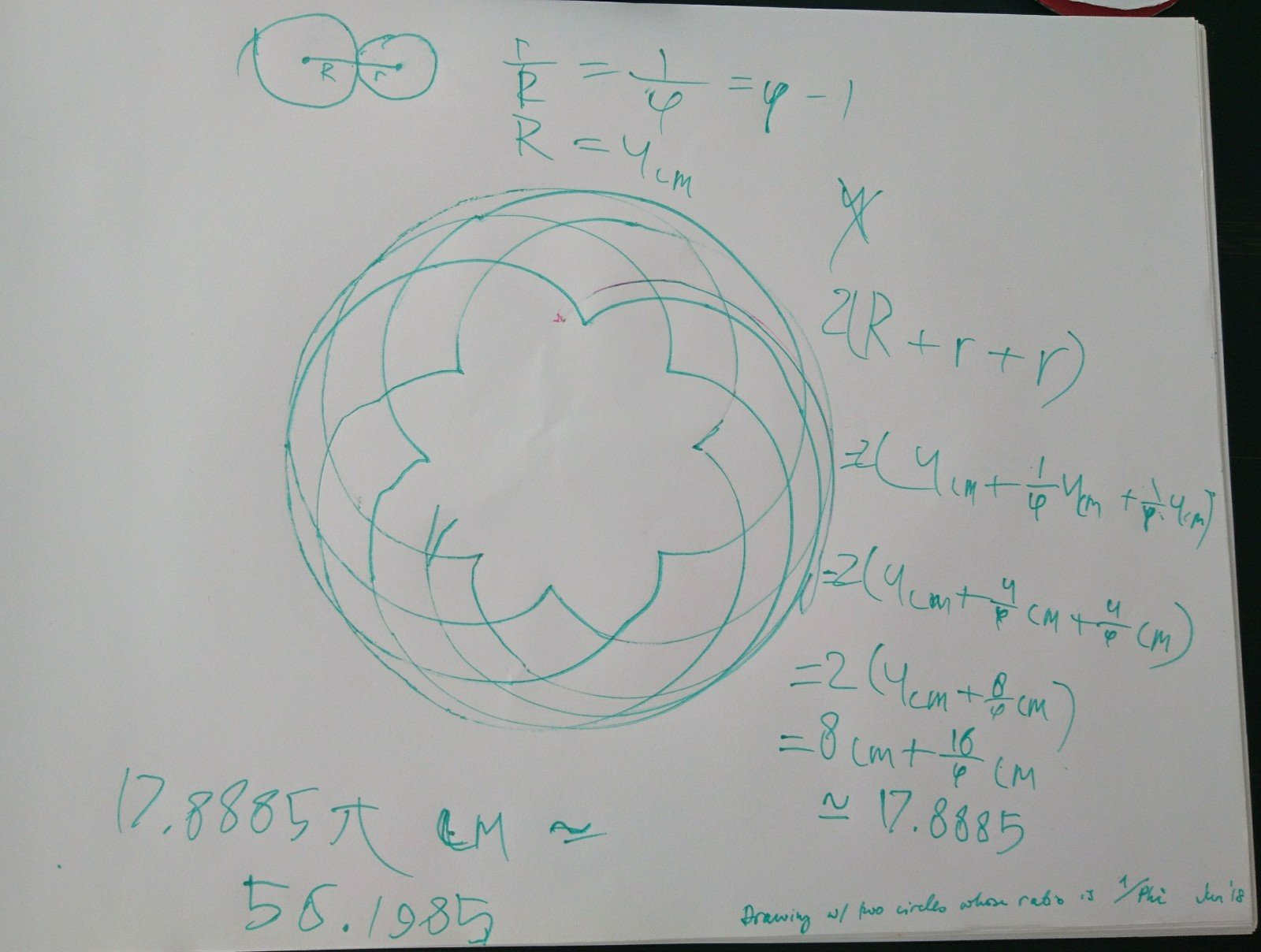 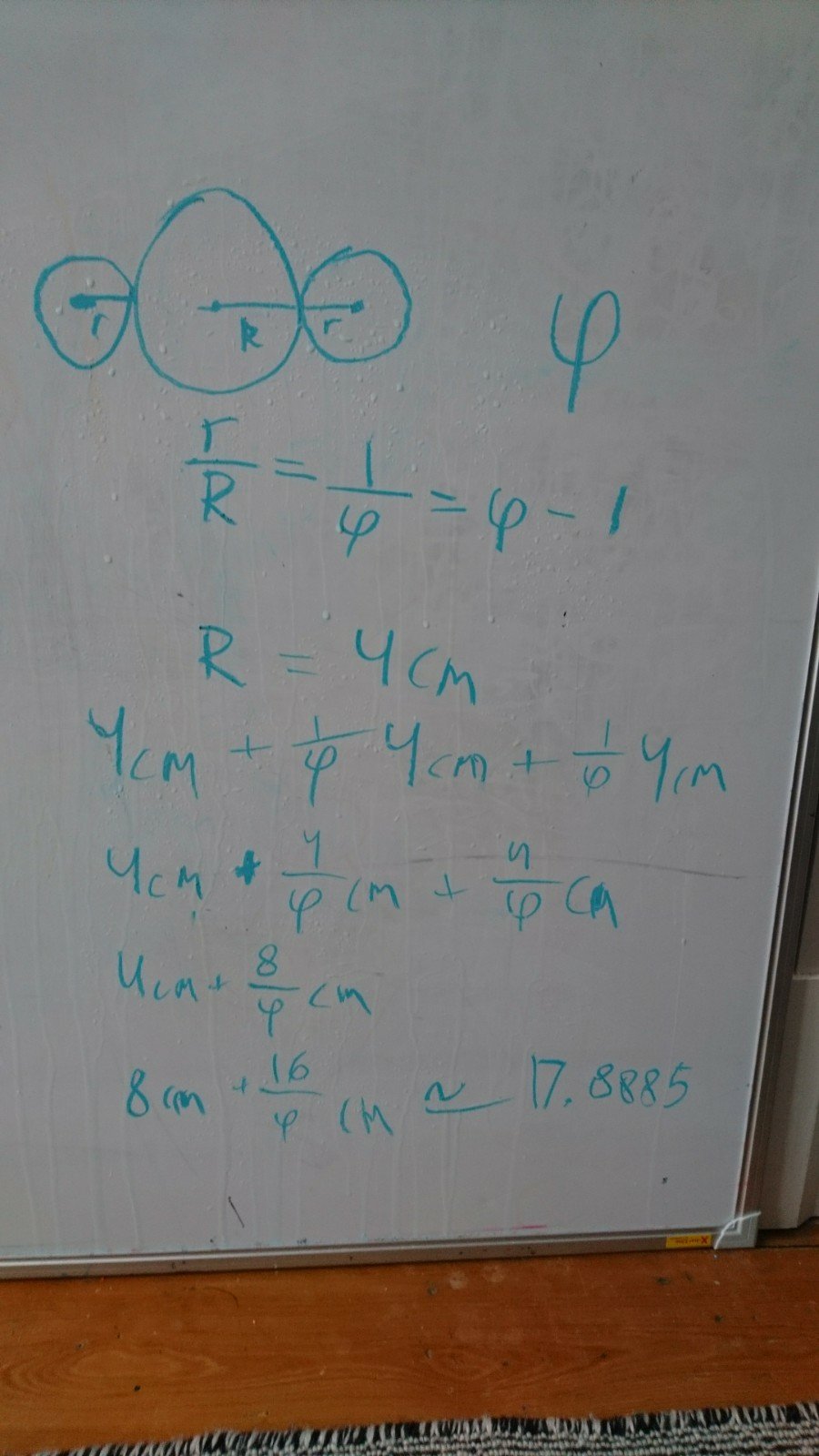 Two days later, we also tried rolling a circle in a circle (the ratio was 1/2 this time): 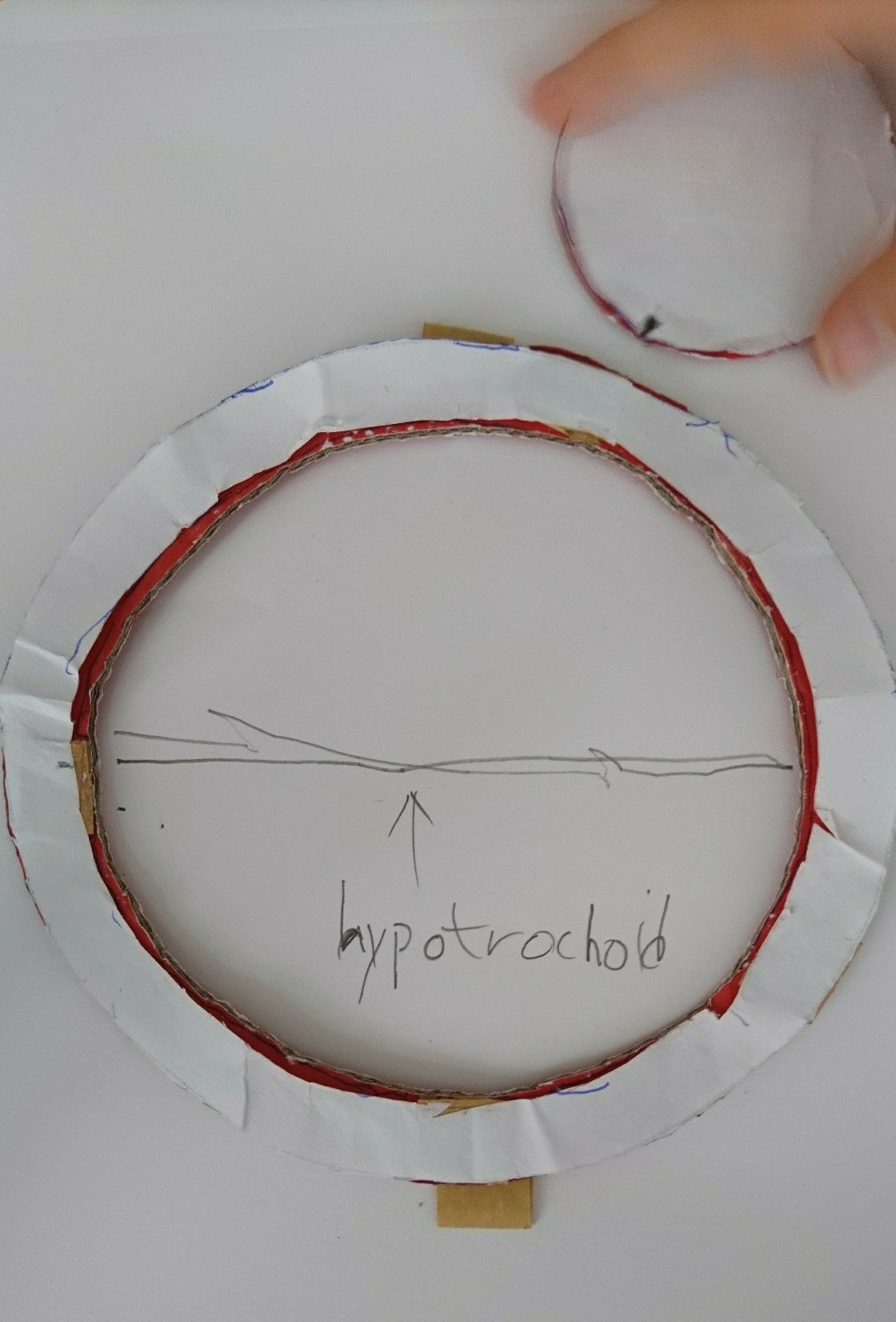 Simon writes: “But, the experiment wasn’t over yet. We then tried designing a handle going on to the circle:

When we cranked the handle, such that the circle rolled, we were supposed to get an ellipse, but instead of that, we got something else boring, a perfect circle (although you could say a circle is a kind of ellipse)! Then I tried it on my own, and I got a not that boring ellipse.”

Simon has come up with a proof that Phi (the Golden Ratio) is an algebraic number (not transcendental). He proves it by showing that Phi can be the solution to a polynomial equation (which would be impossible if it was a transcendental number). Indeed, if you simplify Simon’s polynomial further, you can get x squared minus x equals one, which describes one of Phi’s remarkable qualities: the square of Phi (an infinite irrational fraction) equals exactly Phi plus 1. In fact, Simon has talked about this in his previous video (expressing Fibonacci sequence using Lucas Numbers):

Simon wanted to make an outside video this afternoon, about what he’s been thinking of a lot lately – continued fractions. In the video below, he looks for curious number patterns while writing irrational numbers Phi and square root of 2 as their continued fractions. Partially inspired by Mathologer’s videos.

Square root of 2 expressed as its continued fraction:

The Golden Ratio (Phi) and the Fibonacci numbers:

Phi expressed as its continued fraction: 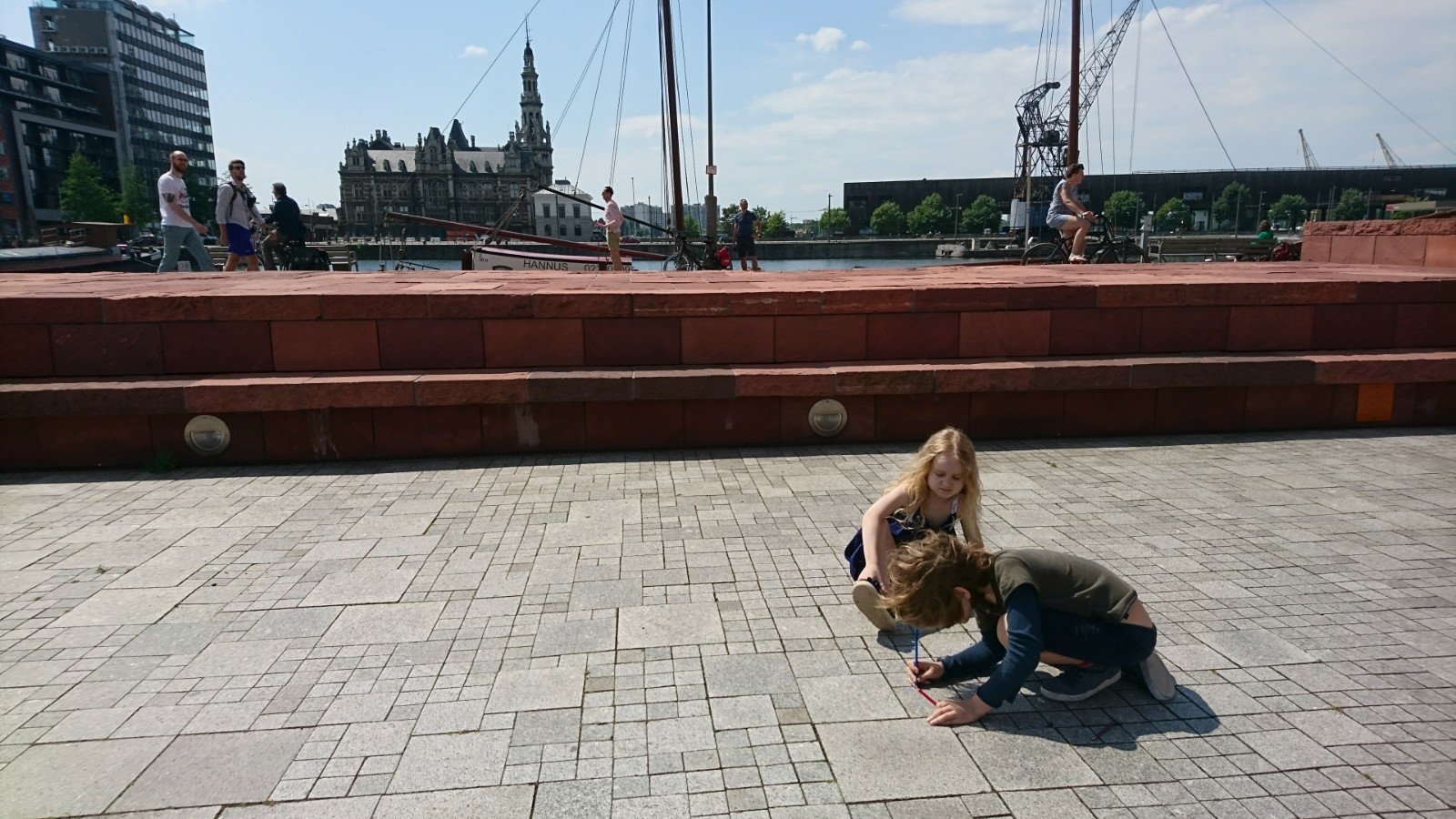 Simon shows how to draw a segment that is Phi times longer than a unit segment. He learned from a video by James Grime how to draw the square root of 5, and worked out the rest on his own.